In August 2010 a meeting was held to discuss the construction of a safety map for Toji-in Kitamachi, Kita-ku, as part of a collaborative project between Ritsumeikan University’s Research Center for Disaster Mitigation of Urban Cultural Heritage and the town. The meeting was to consider the content to be included on the map. Residents of Toji-in Kitamachi, the local fire department, and the local police station were in attendance, and engaged in a constructive discussion. Details as to how to best make the map easily comprehensible to residents, its size, and the kind of writing style that should be adopted, as well as the kind of information that should be noted, and the necessary emergency telephone numbers, were agreed. It was also agreed that the walkabout will be held in the town in September, and details of the information to be noted on the map will be confirmed in each area. 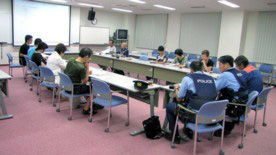