In August 2009 the Research Center concluded an agreement with a collaborative disaster prevention research and investigation agreement with Kinugasa school district. As part of this agreement, both parties are engaged in an endeavor to draw up a safety map for the town to use in the event of a disaster, with a view to increasing the disaster preparedness of the town. This meeting was held with local residents and the local fire department with the idea of encouraging people to think of the safest routes of evacuation in the event of a disaster, and to consider the best ways in which to make a map that would illustrate them. The discussions were highly productive. The plan is to make a safety map for Toji-in Kitamachi with the help of local residents by this summer. It is hoped that this method of drawing up safety maps with the input of local residents will start a trend to be followed in other neighborhoods in Kinugasa school district. 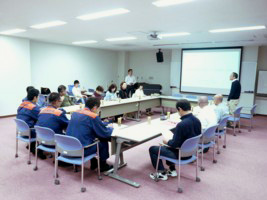